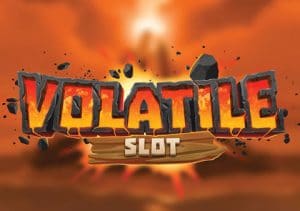 Head to an island volcano

There’s a simple, classy look to the design in Volatile Slot. Flanked by palm trees and backed by an island volcano, the reels are made up of A to 10 symbols as well as a range of prehistoric-style objects. They include a drum, a campfire and a shrine. The woman is the top symbol. She pays 0.8, 4, 8 or 40 times your stake if you land 2, 3, 4 or 5 in combination. In fact, you only need to land 2 of a higher value symbol to create a winning line.

The volcano is the standard wild. This can appear on the middle 3 reels only. These random wilds can erupt at random when they hit and turn into exploding wilds – this is known as the Exploding Wilds feature. These come with 2x, 3x or 4x multipliers attached. If you land more than 1 exploding wild in the same winning combination, then the amounts are multiplier. For example, a win that included a 2x wild and 4x wild would get boosted by 8x. The prefect scenario is to land a trio of 4x exploding wilds as the payout would rocket by a massive 64x!

There aren’t any scatters in Volatile Slot. Instead, the Free Spins feature is triggered by landing 3 wild symbols on the same spin. Your reward is 10 free spins. Extra wilds and exploding wilds are added to the reels during the free spins to boost your chances of landing a re-trigger or some big multipliers (up to 64x).

The primitive theme in Volatile Slot is matched by the simple design and gameplay. The graphics are nicely done, backed by a rhythmical, drum-heavy backing track. The features are similarly straightforward. That’s not a criticism though.

If you want bonus features galore, you won’t find them here. For classic gameplay and explosive potential, Volatile Slot lives up to its name. For more highly payout slots, Microgaming’s Immortal Romance game would be a good place to start.