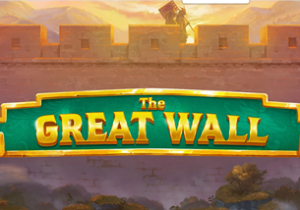 Head to the Great Wall of China

There’s a historical feel to the design to The Great Wall game. The reels are set against the backdrop of the Great Wall of China. You’ll see A to J symbols plus gold coins, treasure chests and a group of warriors. The woman is the best paying symbol, offering awards of up to 25 times your stake per line. There’s also a wild that can land anywhere and replace all the standard symbols.

Above each reel you’ll see a battlement. On each of these you’ll see a multiplier value of up to 1,000 times your stake or a Free Spins banner. If the emperor symbol appears, you’ll win the prize show on the battlement directly above. The prizes on each battlement shift 1 to the left with each spin – this is known as Th Great Wall feature.

Land the smiling emperor with the Free Spins banner directly above it and you’ll trigger the Free Spins feature. On offer here are 10 free spins. The prizes in the bonus round are larger than those on offer during the base game. Awards can reach 2,000 times your stake here.

Hope to see the emperor land underneath a Double Win banner during the Free Spins feature. This doubles all the winnings you’ve earned from the free spins you’ve played during this round so far. You can add more free spins to your total by landing the emperor under the +2 banner.

Novel take on a classic theme

We’ve lost count of the number of Chinese-themed slots we’ve played. With its unusual gameplay, The Great Wall offers something a little different. The shifting battlement bonus can get quite tense if a high value multiplier appears. The visuals are very well constructed and the soundtrack has a classical feel.

Put those elements together and you have a nice all-round slot which should appeal if you like the Chinese or historical theme. It can also give you wins of 8,297 times your stake in total!