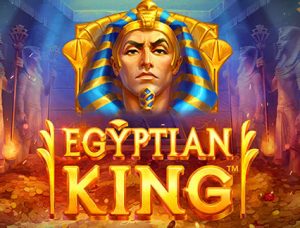 A chamber in the Pharaoh’s palace is the setting for Egyptian King. The 3x4x4x4x3 reels are made up of sandstone blocks. On them you’ll find A to J royal values as well as 6 higher value Egyptian hieroglyphs. The best of these is the bird god Horus which pays 3, 7,5 or 25 times your stake if you land 3, 4 or 5 on a line.

Pharaoh Respins feature - these are triggered by landing the amulet symbol on reels 1 and 5 on the same spin. You’ll then receive 3 respins. Extra wilds can be added on these respins. These come complete with up to 3x multipliers. If a wild lands, it remains on the reels but shifts position with each respin.

Free Spins feature - land the pyramid bonus symbol on reels 2, 3 and 4 on the same spin and you’ll trigger the second feature. On offer here are 10 free spins. Joining the action are special golden wilds. These are sticky wilds that can also come with multipliers of up to 3x attached.

Called the Golden Wilds feature, each golden wild that lands also removes the lowest value royal symbol from play. If a golden wild symbol lands on your final free spin, 1 additional free spin is added to your total.

This ancient adventure comes with some pretty nifty extras. Both the respins and the free spins round can be well worth landing thanks to the wild and multiplier extras. This is a volatile game and the variance is high. There are wins of up to 8,752 times your stake available in total!

If the Egyptian gods are in benevolent mood, then the extras they offer can summon up plenty of the Pharaoh’s treasure. If you want ancient Egyptian riches, you’re in luck as it’s by far the most popular theme for a slot game – the best ones include Book of Dead from Play ‘N Go and Book of Gods by Big Time Gaming.