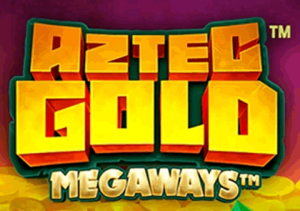 The design in Aztec Gold Megaways is superbly done - the reels are set within a stylised Aztec temple building. The symbols appear on stone blocks which drop into position on each spin. There you’ll find gold A to 9 symbols alongside a bird, a snake and a leopard.

The Megaways game mechanic uses the Reactions feature. After a winning combination hits, the winning symbols are removed and new ones drop in and replace them. These reactions continue as long as a new winning line is created. The number of symbols on each reel changes with each spin. At their maximum size there are 117,649 ways to create a winner.

The Aztec Gold Cash Respins feature is a streak respin round. It’s triggered by landing 5 or more of the Sun Disc scatter symbols on the same spin. The triggering symbols are held and 3 respins follow. If a new Sun Disc lands, the number of respins resets to 3.

When your respins are done, the cash and multipliers combined to give you an overall payout. Keep a special eye out for the Mini, Minor and Major Sun Disc scatter which award 30, 100 or 1,000 times your stake respectively.

On any base game spin you could benefit from a special modifier. The Max Megaways feature expands the reels so they offer 117,649 ways to win. You could also see 20 Sun Discs added at random on any spin which would trigger the Aztec Gold Cash Respins feature.

You won’t find many better-looking slots than Aztec Gold Megaways. The highly stylised imagery is superbly done, backed by a rhythmical backing track. The gameplay matches the high spec looks too with the cascading reels and streak respins delivering plenty of play. Medium to high variance, you can pocket a whopping 19,200 times your stake.

Put all that together and this jungle adventure becomes a very playable package and definitely a slot to consider if you enjoy Megaways action. If you want something simpler but just as potentially rewarding, iSoftBet’s Hot Spin Deluxe would be my recommendation.