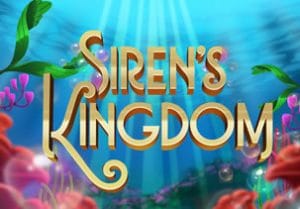 The Iron Dog Studio design team deserve a pat on the back as Siren’s Kingdom is very easy on the senses. Set below the ocean waves, the reels include stone-style A to 10 playing cards, starfish and a collection of sea shells which have been embellished with pearls. The most rewarding of them will get you 400 coins for a 5 on a line combo.

Helping to create those winning combinations is the mermaid who is the wild - she doesn’t offer any payouts but does replace all other symbols apart from the scatter. Better still, whenever a wild lands, it expands and fills the whole of the reel. You can multiple wild reels on each base game spin.

Landing 3, 4 of 5 of the scatter (the octopus holding a pearl) brings the Free Spins feature into play. Here you can look forward to 14, 25 or 36 free spins. You won’t see expanding wilds during the feature though - there’s an equally good substitute on offer though.

Every time a wild lands during the free spins it’s held. On the next free spin, 2 more symbols next to the original wild will become wild too. After the payout consideration has been made, the wilds float away and a new free spin follows. Land more than 1 wild on the same free spin and the reels can quickly fill with wilds on the free spin that follows.

We didn’t have especially high expectations when we opened up Siren’s Kingdom but were pleasantly surprised. There’s a classy look to the visuals and the sweeping orchestral score is an ideal match. The range of features isn’t huge but the expanding wilds keep things ticking over in the base game. It’s the Free Spins feature where the best opportunities arise thanks to all the extra wilds in play – this makes it easier to land the maximum 1,000 times stake win per spin.

With hundreds of watery-themed slot games already on the online casino shelves, it’s hard to stand out. There’s nothing revolutionary on offer in Siren’s Kingdom but the combination of classy design and an impressive feature round make this underwater adventure worth a closer look. I also suggest you try other Iron Dog Studio offerings with Rainbow Wilds and Blood Queen superb options.