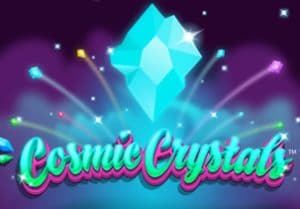 Visually, Cosmic Crystals is set in outer space and looks quite a lot like Starburst from Net Entertainment. Symbols on the reels include A, K, Q, J and 10 playing cards as well as 5 gemstones. The yellow one is the most lucrative giving you 20 times your stake for 5 across a payline. You can also win by getting 2 of any symbol on a payline too.

Look out for the wild symbol which replaces all symbols – when it appears, it will expand to create a fully wild reel. It appears on reels 2, 3 and 4 only giving you 3 wild reels potentially on every spin. This is called the Wild Reel feature and is the key to winning big.

Cosmic Crystals comes with a Re-Spin feature – this is triggered when you get a non-winning spin. You will then get a free re-spin until a winning combination is formed. The good news is that any wild reels remain sticky during the re-spins.

Simple in terms of gameplay, this is a low to medium variance title which offers you maximum wins of 350 times your stake on each spin/re-spin – you will need as many wild reels as possible to achieve this. This isn’t my favourite Iron Dog Studio slot game by a long way unfortunately so I recommend you try the horror-themed Blood Queen or the jungle/city inspired Neon Jungle which offer more in terms of bonus features and are more volatile.