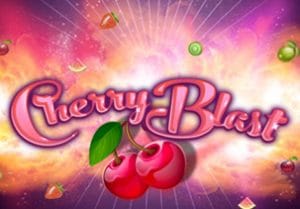 Visually, Cherry Blast sees an assortment of fruit and classic slot machine symbols on the reels – symbols include kiwis, apples, limes, watermelons, strawberries, bells, lucky 7s and golden cherries. The latter are the most lucrative giving you 50 times your stake for 5 across a payline.

There’s a bomb symbol too that can appear on the middle position of the reels – it then proceeds to explode in a random direction to give you 1 of 4 bonus features:

Visually, Cherry Blast looks like a classic fruit machine but actually has some good bonus features – I have found the biggest rewards to come with the Free Spins feature due to the cherry bomb symbols when can give you giant wilds and high value scatters.

I also like the Added Wilds feature as 5 wilds across a payline can prove fruitful (excuse the pun). Overall, a good slot game with maximum wins of 5,000 times your stake on each spin/free spin – I also recommend you try Blood Queen which is Iron Dog Studio’s best offering in my opinion.