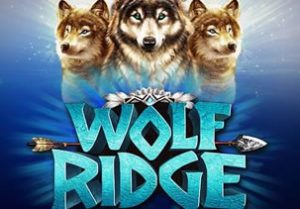 A wintry wilderness is the setting for Wolf Ridge. You’ll see snow-capped mountains and the shimmering Northern Lights in the background. On the reels are 5 lower value gemstone symbols plus a raccoon, a big cat and a mountain goat. The best of the standard symbols is the wolf which awards 10 times your stake if you land 5 on a line. There’s also a wild that can hit on the middle 3 reels only.

Above the reels you’ll see the Prize Disk. This consists of cash prizes and free spin triggers. These move across the reels 1 space at a time with each spin. If a wolf scatter appears, you’ll win the prize directly above that reel. This is known as the Prize Disk feature.

The scatter can appear on reels 1, 3 and 5 in the base game and on all 5 reels during the free spins. If that scatter hits on reel 3 in the base game the payout gets a 3x multiplier boost and is trebled. Prizes on offer from the Prize Disk in the base game range from 2 to 70 times your total stake.

If you land a scatter under the free spins on the Prize Disk, you’ll trigger the Free Spins Bonus feature with 10 free spins. The paytable increases during the free spins with the prizes on offer from the higher paying animal symbols being doubled.

Wolf Ridge is a well-designed slot game - the cartoon visuals are nicely done and there’s a Native American feel to the backing track. The Prize Disk feature is central to the action here and offers something a little different. It can come into its own when you trigger the free spins round thanks to the extra scatters and multipliers that are in play. We’re in the medium range as far as volatility goes.

We enjoyed Wolf Ridge more than we expected to. The Prize Disk delivers plenty of action and the free spins round offers enough potential to keep things interesting – up to 1,000 times your stake on every free spin. Get lucky there and Wolf Ridge could leave you howling. If you like wolves, Wolf Gold by Pragmatic Play and Wolfpack Pays from NextGen Gaming should be played.