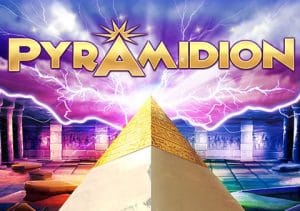 There’s a minimalist look to the design in Pyramidion which is very nicely done. The reels are set against a desert backdrop which is dominated by a range of pyramids. On those reels you’ll find A to J royal values plus 5 higher value hieroglyph style symbols. The best of these is the blue and gold sun motif which awards 25 times your stake if you land 5 on a payline.

There’s also a wild that substitutes for all of the standard symbols as well as offering awards of 0.25, 2.5 or 50 times your stake for 3, 4 or 5 in combination. There’s a decent variety of extras on offer in Pyramidion.

Free Respin Modifier feature – this is triggered by landing 2 of the pyramid symbol on the same spin. You’ll then receive a respin with 1 of the following modifiers:

Tomb of Power Free Spins feature - land the Free Spins symbol on reels 1 and 3 plus the Tower of Power symbol on reel 5 to trigger this round. You’ll then receive 8 free spins. Keep an eye out for the Power Reels Meter which increases by 1 with each free spin. Each time a lightning bolt symbol lands, a number of surrounding symbols (equal to the Power Meter) are transformed too. These all turn wild and an extra free spin is added to your total.

Tomb of Mystery Free Spins feature - free spins symbols on reels 1 and 3 plus the Tomb of Mystery on reel 5 activates the second bonus round. A wild reel with a 2x multiplier appears on reel 5. With each free spin, the wild reel will either stay in position and increase its multiplier by 1. Alternatively, it can shift 1 reel to the left with no multiplier increase. The round continues until the wild reel has moved right across the screen and the stop icon appears above reel 1.

With so many similarly themed slot games available, it’s a task for developers to create something original. IGT has made a pretty good attempt here. There’s an understated look to the visuals which are very well put together. Likewise, the Arabian-style backing track.

The gameplay offers something different too. There’s plenty of variety on offer from the re-pin extras and the free spin rounds offer some very decent potential. Be warned though, this is an extremely volatile slot game. Expect spells as dry as the desert. If the free spins work their magic though, you could land riches fit for a Pharaoh.

Basically, you can win up to 1,000 times your stake on each spin/respin/free spin – if the multiplier reaches 5x for example, the win potential would be 5,000 times your stake (and so on). If you like the ancient theme but fancy something a little unusual, then Pyramidion is definitely one to consider.