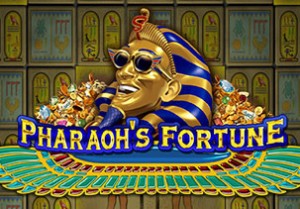 The reels in Pharaoh's Fortune are filled with a selection of brightly-coloured hieroglyphic symbols.  More interesting though are the extra symbols - chief among them is the golden pyramid which acts as the game's wild. Find 5 in a payline and a massive 10,000 coin jackpot awaits. Finding just two will give you 50 times your line bet.

Look out too for the scarab which is the scatter - find between 2 and 5 of them anywhere on the reels and you'll win between 2 and 50 times your total stake.

Pharaoh's Fortune comes with a Free Spins feature which is triggered when you find 3 of the Sphinx symbol on the same payline. You'll be awarded 3 free spins to start with along with a 1x multiplier but plenty more extras are on offer.

Start picking from the 30 stones from the pyramid wall to reveal extra free spins and multipliers. 22 of the blocks will reveal an extra spin, 5 will offer a 1x multiplier and 3 feature the Start Bonus Block which brings your picking to a close. You're guaranteed a win of 3x the triggering payline bet during every spin of the feature.

The free spins are played out on a new set of reels which feature a fresh set of hieroglyphics including a series of dancing ancient Egyptians. The wild can still be hugely profitable during the free spins, offering 10,000 coin payouts if you find five in a payline.

Pharaoh's Fortune may not be overstocked in the features stakes but the feature is excellent. The visuals may be a little old looking (despite being revamped) but they certainly add to the charm, as does the soundtrack of Walk Like an Egyptian by 80s songstresses The Bangles.

Egyptian themed online slots are ten a penny and Pharaoh's Fortune may be something of a veteran - but it's become a classic for a reason. It’s one my favourite all-time slots and is also available to play on mobile and tablet devices. Other Ancient Egyptian-themed slots I’d recommend including Book of Ra Deluxe by Novomatic and Cleopatra II (also by IGT).