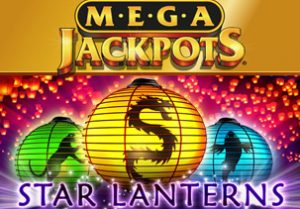 MegaJackpots Star Lanterns has a Chinese theme - set against a tranquil backdrop filled with lanterns and a lake, the reels offer a bright assortment of objects.  There are 7 different lantern symbols in all, ranging from the simple to the beautifully ornate.

The most rewarding is gold with red sashes which awards 1,000 coins if you land 5 on a payline. The delicate red lantern is the wild - it replaces everything bar the star, bonus and Mega Jackpots symbol. Very nice it all looks too but what we're interested in here is the gameplay and how to land those massive jackpots.

You'll notice that MegaJackpots Star Lanterns is played using a Floating Reels feature - following a successful spin, the winning symbols are removed and the ones below float up and replace them. These floats continue as long as there's a new winning combination in view.

Look out for the 3D star symbol which appears on reels 1, 2 and 3 only - each 1 of these boosts payouts with a 2x, 3x or 5x multiplier. If 2 or more of them land on the same spin (or float) the multipliers are added together! This is known as the Star Multiplier feature.

The pink flower is the bonus - landing 3 of these anywhere on the reels will result in a payout of double your total stake as well as triggering the Free Spins Bonus feature. Pick from the 3 lanterns shown to reveal the number of free spins you've been awarded - this will be between 4 and 14. The Star Multiplier and Floating Reels features are in play during the feature too.

The Star Multiplier can also reveal a Mega Jackpots symbol - if you land 4 of these on the same spin (or succession of floats) in either base game or the feature, you'll win the big one. Following any spin that doesn't trigger the jackpot, you could get another shot via the behind-the-scenes Second Chance drawing. This too can also award the Mega Jackpot progressive. Like most progressive slot games, the higher the bet the better the odds of landing a biggie.

We found plenty to like in this Chinese-themed game - the design is excellent combining classy visuals with a catchy backing track. The features impress too. The floating reels keep the pace ticking over nicely and the multipliers can add some timely boosts in both the base game and free spins.

Even without the presence of a progressive prize, MegaJackpots Star Lanterns would be a very playable slot game. Throw in a shot at winning an enormous score and this gentle looking slot becomes a must play for jackpot hunters. I also recommend you try other IGT jackpot titles with MegaJackpots Isle O’ Plenty recommended.