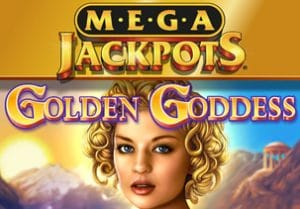 The design in MegaJackpots Golden Goddess is pretty simple - joining the usual lower value royal values are a dove, a horse, a pony-tailed man and the Golden Goddess. She’ll get you 50 coins if you land 5 on a line. That sounds pretty puny - you’ll see stacks of matching symbols spinning around the reels which can deliver some impressive clusters. This is known as the Super Stacks feature.

The Golden Goddess logo is the game’s wild - it replaces all other symbols bar the scatter (the red rose) and offers awards of up to 1,000 coins per payline.

Land the red rose scatter fully stacked on the middle 3 reels to trigger the Free Spins Bonus feature - here you’ll be awarded 7 free spins. 1 of the dove, horse, man or Golden Goddess will be the special transforming symbol throughout the feature meaning all stacked symbols on a reel change into the same symbol.

Life changing sums of money are on offer via the MegaJackpot. The rest of the action in MegaJackpots Golden Goddess is low variance. This isn’t a very volatile offering at all and you can expect plenty of play for your investment. Expect to land the free spins at regular intervals and see the cashier ticking offer steadily.

This isn’t the most beautifully designed slot game you’ll see. The visuals are clear enough but don’t have the flair we’ve seen from some other developers. The same goes for the gameplay which is pretty simple. What makes these games so playable is the potential riches on offer from the progressive jackpot.

With its low variance, MegaJackpots Golden Goddess is a pretty good place to start for newbies or players trying to eke out as much play as they can from a limited bankroll. I would much rather play other similarly themed slot games which also offer progressive jackpots and higher variance – any of the Age of the Gods series from Playtech do the job.