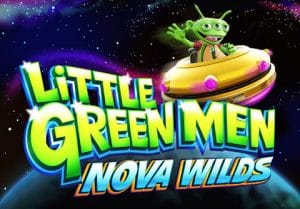 There’s a light-hearted, cartoon feel to the design here. With a planet and stars in the background, you’ll see A to J symbols carved into meteors. They’re joined by control panels, helmets, ray guns and a little robot. The best paying symbol is the Little Green Men logo which awards 25 times your stake if you land 5 in combination.

There’s also a wild that replaces everything apart from the flying saucer bonus symbol. On any spin, you could receive 1 of the following modifier features:

Little Green Men also comes with a Free Spins Bonus feature which is triggered by landing 3, 4 or 5 of the flying saucer bonus scatter on the same spin. You’ll then receive 6, 12 or 24 free spins which are played out on an expanded game engine that offers 40 rather than the usual 20 paylines.

You can also expect to land the modifier extras more frequently during the feature than in the base game – this means you could get wilds, wild reels, blocks of wilds, re-spins and, more importantly, multipliers up to 25x on every free spin! Finally, you can retrigger the feature various times with a whopping 120 free spins to be won in total.

We weren’t really expecting much when we fired up Little Green Men Nova Wilds - it proved to be a pleasant surprise. The cartoon visuals are nicely done, complemented by a suitably eerie backing track.

The quartet of modifiers can deliver plenty of action, likewise the Free Spins Bonus feature. It’s pretty feisty on the volatility front too. The variance is in the medium to high range with maximum payouts of 25,000 times your stake on each free spin (with 40 paylines and the 25x multiplier). The 25x multiplier can also pay 12,500 times your stake on each base game spin!

This alien adventure won us over. Little Green Men Nova Wilds is one of IGT’s better recent releases and certainly one to consider. If you fancy taking on aliens, Reptoids by Yggdrasil Gaming and The X-Files by Playtech are worth trying.