Recommended casinos to Play Ghostbusters Plus 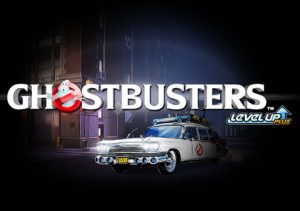 The design in Ghostbusters Plus is done cartoon style. With a New York street scene in the background, you’ll see A to J symbols as well as the 4 Ghostbusters – Winston Zeddemore (Ernie Hudson), Egon Spengler (Harold Ramis), Ray Stanz (Dan Aykroyd) and Peter Venkman (Bill Murray). Venkman pays 2, 8 or 20 times your stake if you land 3, 4 or 5 on a payline. The Ghostbusters logo is the wild. This replaces all of the standard symbols and pays 4, 20 or 40 times your stake. There are loads of extras to get stuck into here.

These wilds go live at the start of a spin. These can come with multipliers of 3x, 5x or 10x attached at level 1. Work your way through the levels to bring other expanding wild extras into play. These can expand horizontally, diagonally, in cross formation or to all adjacent positions. You could also land multiple wilds together.

Then there’s the Equipment feature -offering various extras, these can trigger at random following any base game spin.

Level Up Plus feature

To start with, the Proton Pack is live. Work your way through the levels to unlock the others. This is called the Level Up Plus feature. There’s also a Tobin’s Spirit Guide feature - this becomes active when all 9 ghosts are captured. You’ll then have the pick of the ghosts.

The Zuul Free Spins Bonus feature is triggered by landing the Zuul bonus symbol on reels 1, 3 and 5 on the same spin. You’ll then zap to receive your free spins (5) and ghost wilds. The multipliers from the wilds can reach a maximum of 25x here. You could see 5 extras wilds or wilds that can expand in all directions. Re-triggers are possible too, offering up to 25 free spins.

There’s plenty going on in Ghostbusters Plus. At first glance it can seem quite complicated. All you really need to know is that winning Ghost Battles unlocks extra features. The more levels you work through, the better those extras become. That’s certainly true of the Zuul Free Spins Bonus feature where some really big modifiers can hit.

It’s not the most stunning slot game you’ll see as far as design is concerned. A shame they couldn’t sneak Ray Parker Jr’s classic theme song in either. That said, if you enjoyed the original movie, you’ll like what’s on offer in Ghostbusters Plus. The 25x multiplier can also lead to 25,000 times stake wins! If you like slot games based on movies, there’s plenty to choose from with Planet of the Apes (Net Entertainment) and Suicide Squad (Playtech) my favourites.