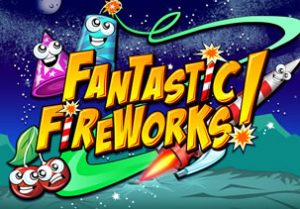 As you’d expect given the theme, Fantastic Fireworks is a bright and colourful offering. With a cityscape at night in the background, you’ll see 7 different firework symbols plus a Catherine wheel which is the wild. Rather than spinning, symbols float up onto the reels. As usual, landing 3 or more symbols on a line creates a winner. Exploding symbols are key to the action though.

All exploding symbols can replicate and create even more chances to land a winner – this is known as the Floating Reels feature.

Fantastic Fireworks comes with 2 main feature rounds. These are triggered by landing symbols with sparklers attached. Each time 1 lands, it’s collected in a meter. Once you’ve amassed 20, you’ll be awarded 1 of the features randomly:

Despite the explosive theme, the variance here isn’t especially high. This is a low to medium volatility game with top payouts of 524 times your stake on each spin/free spin. The gameplay here takes a little getting used to. There’s enough to like here once you have got your eye in.

It might not be the best slot you’ll see but this pyrotechnic show is still worth a watch. I would much rather play Esqueleto Explosivo from Thunderkick which has features fireworks.