Recommended casinos to Play Day Of The Dead 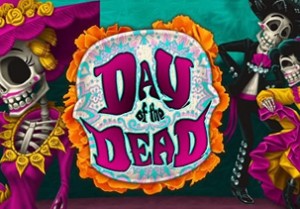 You'll notice that Day of the Dead comes with hexagonal shaped reels which offer 720 ways to win - combinations can be formed from right to left as well as the standard left to right. Winning combos are formed when the same symbol lands on adjacent reels.

The reels, in keeping with the festival itself, have a slightly creepy feel with skulls and skeletons the dominant feature. Symbols include punch bowls, a pie, flowers and fruit as well as a Mr and Mrs Skeleton and a skeleton Mariachi band. The Day of the Dead logo is the top payer, giving 1,000 coins in you land it on 5 successive reels.

The 3 coffin symbol is the game's wild - it substitutes for everything bar the bonus. If you land 5 bonus symbols on successive reels, you'll trigger the Free Spins Bonus feature and be awarded 8 free spins. Remember though, that because of the 720 ways to win game engine, it's possible to land multiple combinations here.

In theory, it's possible to land 96 free spins from a single spin. There are more free spins to earn during the feature with a whopping 240 free spins possible.

The visuals are dominated by pastel colours which can be a littler overpowering at first view, especially as there's so much going on, on the reels. The soundtrack has a nice Mexican feel though and certainly adds to the atmosphere.

The 720 ways to win game engine means that you can expect plenty of action and small wins aplenty. That said, it's certainly possible to win big playing this slot. Indeed, one lucky player manage to bag a score of €480,000 on Day of the Dead in 2013.

Of course such a giant win doesn't come along every day but there's still plenty to enjoy in Day of the Dead. It doesn't quite match up to the visual excellence of Thunderkick's Esqueleto Explosivo which has a similar theme, but is still worth a spin if you enjoy the Mexican theme. If you like MultiWay Xtra wagering slots, Pacific Paradise (also from IGT) is essentially the same game but higher variance.