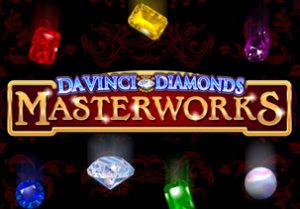 Just like the first slot game based on the Italian renaissance master, the design in Da Vinci Diamonds Masterworks has a luxuriant feel. On the reels you’ll see an assortment of lower value gemstone symbols plus a selection of higher value portraits.

The game is played using the Tumbling Reels feature - when you land a winner, the successful symbols are removed and new symbols drop in and replace them. These tumbles continue as long as a new winner is created. IGT has packed in a good range of extras here.

Giant Portraits feature - land 2 matching stacks of the Da Vinci, Madonna or Mona Lisa portraits and they transform into an expanded 2x2 symbol. If these form part of a winning combination, the payouts gets a 2x, 3x or 4x multiplier boost. Land more than 1 portrait in a winning line and multipliers are combined. You could get a boost of up to 16x here. If there are gaps under giant portraits during a tumble, they’re filled by wilds to further enhance your winning chances.

Mystery Portrait feature - this can trigger at random on any spin and see a non-winning portrait transform into a winner.

Masterworks Gallery Picker - land 3 scatters on the same spin to activate the picker. On offer are 3 different rounds, each of which offers 6 free spins with extras:

There’s also a Second Chance Spins feature - you could also be awarded between 1 and 6 extra free spins at the end of each round.

Many of the elements that made Da Vinci Diamonds such a hit are present in this sequel. IGT has made a few tweaks though, adding plenty more multiplier action into play. As far as volatility goes, Da Vinci Diamonds Masterworks sits in the medium range to offer a balance of payouts.