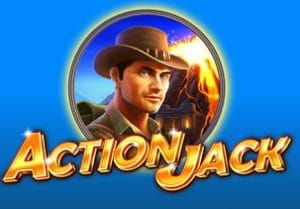 Lush jungle vegetation forms the backdrop to the action here. On the reels you’ll see A to 10 playing card values as well as a treasure map and waterfall that pay up to 3.75 times your stake per payline, the entrance to a citadel and a gemstone which pay up to 6.25 times your stake and a golden statue that awards up to 7.5 times your stake

The volcano is the best standard symbol. Land 5 of these on a single payline and you’ll receive an award of 25 times your stake. Appearing on the middle 3 reels only is adventurer Action Jack who is the game’s wild. He substitutes for all symbols apart from the scatter.

All of the standard symbols, plus the wild, can spin in full stacks and fill entire reels. Furthermore, 1 stacked symbol is chosen randomly before each spin which can appear on various reels for bigger payouts. This is known as the Synchronised Reels feature.

If the base game action is pretty ordinary it can explode into life when you trigger the Free Spins Bonus feature. To do that, you’ll need to land the golden treasure chest - find 3, 4 or 5 of them on the same spin and you’ll win a payout equal to 3, 10 or 25 times your total stake. More importantly, you’ll also receive 20, 40 or 60 free spins.

All payouts during those free spins come with a 3x multiplier which sees all payouts trebled. You can re-trigger more free spins here too with a whopping 500 free spins available in total.

IGT has kept things pretty simple in Action Jack. The cartoon style design is rather basic but does the job well enough.

It’s a similar story with the gameplay. You won’t find much in the way of features here. The Free Spins Bonus feature has the potential to be a cracker though thanks to the large number of free spins on offer and the 3x multiplier. The overall variance is in the medium range with top wins of 3,000 times your stake on each free spin.

Action Jack isn’t the most innovative slot game you’ll see. It’s solid enough though and if the multiplier works its magic in the feature, it can deliver some volcanic action. If you like the theme, I recommend you try Gonzo’s Quest by Net Entertainment.