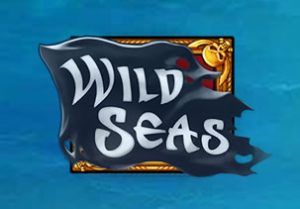 The back story here is that pirate Anne is something of a Robin Hood-style figure, robbing from the mighty East India Company and giving her booty to the deserving local fisherman. The design here is typically well done - you’ll see a selection of different coloured coins spinning around the reels alongside a collection of merchant captains. It’s all as high spec as you’d hope from an ELK Studios production.

Wild Seas comes with 2-level Free Spins feature which is triggered by landing the Wild Seas flag on reels 2 and 4 on the same spin - 1 of the ship’s captains is selected at random and replaces all of the other captains. You’ll then begin part 1, Break The Convoy!

A convoy of wild sailing ships will then fill reel 5 - they sail 1 reel to the left with each free spin. Watch out for the pirate ships on reel 5 - if 1 of these lands, it fires a cannon at the ship on the same row and holds it back for a spin. Once a ship receives 3 hits, it’s sunk and reveals the captain’s treasure. If you don’t manage to sink any ships, the feature finishes when all the ships have sailed off the left most reel. Collect as much loot as you can before moving to part 2, Loot The Treasure.

Any treasure chests from part 1 turn into sticky wilds. More treasure chests can land on the middle 3 reels here, adding even more wilds. Extra sailing ship wilds are added to the reels in this feature to add even more winning opportunities. The free spins keep on coming until you land a bomb barrel on reel 1 which explodes to bring the feature to a close.

This is just what we’ve come to expect from an ELK Studios-powered slot game. The imagery is excellent and there’s a stirring soundtrack to match the pirate theme. The base game offers few frills but the action can really explode into life during the feature round courtesy of the sailing and sticky wilds.

There’s no shortage of pirate-themed slot games. Wild Seas is certainly one of the better ones. Combining high spec design and a cracking feature round, this volatile, seafaring tale is certainly worth a spin as you can win up to 1,780 times your total stake on every spin/free spin.  If you like the pirate theme, 1429 Uncharted Seas by Thunderkick and Skulls of Legend by iSoftBet are recommended.