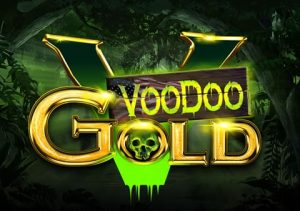 The sweaty swamplands of Louisiana in the American Deep South form the backdrop to the action in Voodoo Gold. The reels are filled with voodoo and black magic imagery. It’s all suitably creepy. The symbols can appear in 1x1, 2x2, 3x3 or 4x4 blocks. The oversized symbols come in a voodoo state. This fills any symbols directly below with wilds. The big symbols can themselves form part of a winner when they hit the bottom of the reels

As usual for an avalanche reels slot game, successful symbols are removed and new ones drop in and replace them. These avalanches continue as long as a new winner hits. Successive wins can add extra rows to the game engine. This also increases the number of ways to win from the standard 4,096. At their maximum, the reels can offer 262,144 ways to win.

Land a single Bonus symbol to activate the Bomb feature. The Bomb explodes, removing adjoining symbols in a diamond formation. A new avalanche then fills the gaps and a new payout calculation is made.

Up to 30 bonus drops/free spins

Land 3, 4, 5 or 6 Bonus symbols on the same spin and your reward is 6, 9, 12 or 15 bonus drops/free spins in the Free Drops Bonus Game feature. Land a winner here and the safety level shifts up a level and opens up another row and more ways to win.

Any wild that hits in the free spins but doesn’t result in a winner turns sticky. A losing free spin doesn’t take you back to 4 row machine either – the number of rows/ways to win can only increase. You can also retrigger the feature giving you up to 15 more free spins.

A slot game called Voodoo Gold wasn’t going to be filled with unicorns and rainbows and the design is as creepy as you’d hope. The swampy visuals are nicely done, backed by a classic Cajun soundtrack. It’s a similar story with the gameplay which is volatile.

Expect plenty of spells that will leave you cursing. If the avalanches, bonus bombs, wilds and free spins work their magic then Voodoo Gold can conjure up a rather entertaining spell and gives you wins of 5,000 times your stake on every spin (or drop). This is the third slot game in the Gold series – Ecuador Gold was the original.