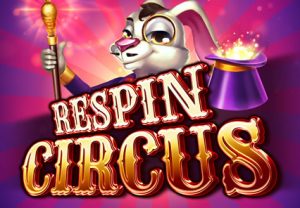 With a giant big top in the background, you’ll see balloon style royal values as well as maracas, cannons and a collection of cartoon animal performers. It’s as glossy and high-end as you’d expect from an ELK Studios slot game. The rabbit is the game’s wild. This expands to turn the whole reel wild when it hits. The wild rabbit can also come with multipliers attached which can boost payouts by 2x, 3x or 4x. There are 3 main features on offer in Respin Circus.

Respin feature - each time you land a winner, the successful symbol are locked in position and the rest of the reels spin again. If you land a matching symbol or wild, the process is repeated. The respins keep on coming as long as a new symbol joins the cluster. You could also benefit from a Symbol Upgrade feature where the value of the cluster upgrades for better payouts.

Free Spins Bonus feature - this feature is triggered by landing 3 or more of the free spins scatter on the same spin. With respins awarded, your aim is to collect as many free spins symbols as possible – there’s up to 24 free spins to be won initially. Land a golden bonus ticket during the round and an extra free spin is added to your total. You can also benefit from multipliers from the wild as well as respins and symbol upgrades.

A trip to the circus wouldn’t be at the top of our list of top night outs. We enjoyed this virtual visit to the big top though. The visuals are excellent and there’s plenty to get stuck into on the gameplay front. The expanding wilds, streak respins and the free spins round are a good combination.

This is a volatile game too. The variance isn’t stratospheric but it’s high enough to keep you on your toes – you can win 2,500 times your stake on every spin. Respin Circus is another very solid release from ELK Studios and is one performance that’s well worth a view. I suggest you play Sam on the Beach which is by far my favourite ELK Studios slot game.