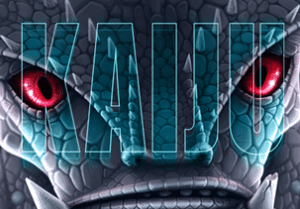 There’s plenty of back story in Kaiju so a quick explanation first. The only remaining human outpost on earth is an artificial island in the Pacific - the Kaiju are dragon-like creatures that grow gemstones and gemstones on their skin. Human hopes rest with female cyborg HA-42 who removes the crystals and returns the Kaiju to their harmless hibernating state. Confused?

It might sound a bit bonkers for a slot game but it does mean the game comes with a beautiful, futuristic setting. With its holograms and neon in the background, there’s a dystopian feel to the design. You’ll see computerised credit cards spinning around the reels as well as a range of brightly coloured crystal and gemstone symbols.

Winning combinations are formed in the usual manner by landing 3 or more matching symbols on adjacent reels from left to right. There’s something on offer if you land a vertical stack of 3 matching symbols too though. This triggers the Vertical Laser feature - here a wild symbol is added above the reels and a new payout consideration is made.

Kaiju also comes with a Kaiju Battle Free Spins feature which is triggered by landing 3 of the HA-42 scatter on the same spin. You’ll receive 7 free spins to start with. Before they begin, a Kaiju is chosen - this will be the opponent during the feature.

The gameplay in Kaiju is a little unusual so a few spins in demo mode are recommended before your invest any real money. As usual for an ELK Studios-powered slot game, we’ve few complaints about the design. The futuristic world is finely realised and reminded us a little of the visuals in Blade Runner. That’s especially true in the mobile version which looks terrific, even on a handheld device.

The back story is a bit outlandish but the combination of high spec visuals, unusual bonus round and high volatility make Kaiju an intriguing proposition. You can win up to 1,305 times your stake on every spin/free spin which helps. If you like futuristic themed offerings, Planet Fortune by Play ‘N Go is recommended.