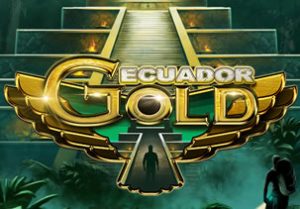 The reels are set within a columned chamber in an Inca pyramid. There you’ll find stones covered in shapes and animal heads. More rewarding are the 3 gold burial mask icons. Best of all is the adventurer which pays 1.8, 2, 2.5 or 3 times your total stake if you land 3, 4, 5 or 6 on adjacent reels. There’s also a standard wild.

Keep a special eye out for the ghosting wilds that can appear on reels 3, 4, 5 and 6 only. This leaves a trail of wilds whenever it hits. Symbols can appear in 1x1, 2x2, 3x3 of even 4x4 blocks. The bigger symbols can clear away positions below it too – this is known as the Big Symbols feature.

The action takes place using a symbol drop game engine – called the Avalanche feature. After a winner is created, the successful symbols are blasted away and a new ones drop in and replace them. Each successive symbol drop win also increases the size of the reels and the number of potential ways to win. If the game engine reaches its maximum 8 row height, there are a possible 262,144 ways to win active! The reels revert back to their standard size following a winless drop.

Unlike the base game though, the reels don’t revert back to the original size following a losing drop. The expanded reels are in play throughout. You can also retrigger the feature giving you up to 50 free spins/drops in total.

We liked Ecuador Gold. The visuals aren’t the sharpest you’ll see but they’re good enough and the soundtrack conjures up the Inca theme rather nicely. Whether you enjoy this slot game depends largely on what you make of the symbol drop game engine.

The action can feel a bit repetitive but if you get on a roll during the Free Drops Bonus feature the coins can quickly build up. Get lucky there and Ecuador Gold could live up to its name as it offers payouts up to 2,500 times your stake on each spin/free spin. If you like avalanche/symbol drop slot games, there’s plenty to choose from such as Gonzo’s Quest from Net Entertainment and Extra Chilli from Big Time Gaming.