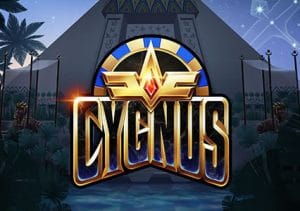 Head to the pyramid of Giza

As we’ve come to expect from slots from ELK Studios, the design in Cygnus is superbly done. With a haunting Arabian-style soundtrack playing in the background, the reels are set against the magnificent Giza pyramid at night. The symbols are set within marble style circles.

There you’ll find green, blue and red gemstones as well as hieroglyph-style birds, camels and cats. The 7 is the best symbol. This pays 5, 10, 15 or 30 times your stake if you land 3, 4, 5 or 6 on adjacent reels. There’s also a wild that replaces all the standard symbols.

Avalanche Reels – with a twist

The action starts on a 6 reel, 4 row machines which combine to offer 4,096 ways to create a winner. Land a winning combination and those symbols are removed with the Avalanche feature. The symbols above don’t drop down directly from above.

They can shift left and right as they drop to fill any open spaces. The avalanches continue as long as a new winning combination is created. At the end of a cycle of avalanches an extra row of symbols is added, up to a maximum of 8. The more rows, the more ways to win with up to 262,144 possible:

Up to 64x multipliers

The X symbol is a multiplier. This becomes active once it reaches the bottom row of the reels. 1 X symbol awards a 2x boost until the current set of avalanches is completed. Subsequent X symbols that reach the bottom raise that multiplier up to 4x, 8x, 16x, 32x and 64x. You can see where you are by checking the meter to the side of the reels.

The Free Drops Bonus feature is triggered when the Bonus symbol reaches the pillar to the left of the reels. You’ll then receive 7 free spins. These are played out on a fully expanded 8 row machine with 262,144 ways to win. If you land a multiplier, it remains active throughout the round and doesn’t reset when a series of avalanches is completed. You can also win a further 7 free spins.

The ancient Egyptian theme is one of the most popular in the online slot world. ELK Studios has created something fresh and original in the Cygnus slot. The sound and visuals are superbly done and there’s plenty to like about the gameplay too.

We’ve seen plenty of avalanche reels slots but the way the multipliers and bonus round are triggered, plus the expanding game engine and the increased ways to win, make for plenty of excitement.

It’s volatile too with maximum payouts of up to 5,000 x stake on each spin or free spin. If you like your virtual trips to the land of the pharaohs, then it’s well worth seeking out Cygnus. If you like the game engine, the 3 Gold series games by ELK Studios are quite similar – the dark Voodoo Gold slot game is the best of the 3 in my opinion.