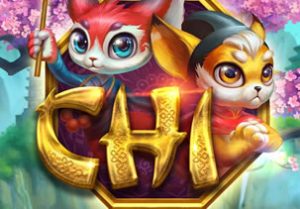 There’s a traditional Asian feel to the imagery in Chi. As usual for an ELK Studios slot game, the cartoon-style design is very high end. Helping your winning chances are a pair of animal spirit characters called Mow and Chi. On any spin a draw is made on the wind and fire totems.

These totems can deliver special powers if they align. The fire totem Chi fires off a series of fireballs which can turn between 1 and 6 symbols wild. When Mow the wind totem becomes active, he bangs a gong which brings a multiplier into play. The size of the multiplier depends on how many times the gong is struck. You can boost payouts by between 2x and 5x here.

The Free Spins feature is triggered by landing 3, 4 or 5 of the free spins scatter on the same spin. You can then look forward to 10, 15 or 20 free spins. Any totem wilds generated by Chi become sticky and lock in place for the remainder of the feature.

The second feature is the Stairway to Fortune Bonus Game feature - this is triggered by landing 3 bonus symbols on the same spin. Work your way along the heavenly cloud path collecting multipliers prizes as you go. If you make it to the Fortune Reels, you’ll get to spin 5 reels. These come on top of any standard multiplier wins. If you’re lucky enough to see the arrow on the top reel, you’ll be in line for a 10,000 times stake payout. This can result in a 12,500 times stake win overall!

Chi is a rather unusual game. As usual for an ELK Studios title, it’s superbly well designed. There’s a decent variety on offer from the extras too. Add the high volatility into the mix and this Himalayan trek is well worth making. If you want to head to the Himalayas, Play ‘N Go’s Pearls of India is highly recommended (and high variance too).