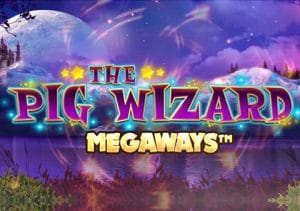 A slot game called The Pig Wizard Megaways was never going to be a super serious affair and the design here has a suitably slapstick feel, starting with the exceedingly bouncy backing. On the reels are A to 10 royal symbols as well as magic themed objects. It’s certainly light-hearted but it comes together very nicely.

The number of symbols on each reel changes with each spin. If they all reach the maximum number of rows, you’ll have 15,625 ways to create a winner. That’s not as big as some Megaways slot games but still offers plenty of opportunities.

To the left of the reels you’ll see the Mystery Mirror. This can add special modifier extras if specific symbols appear in the mirror:

Boosting your winning chances here is a random multiplier which is added to each free spin. This can be anything from the standard 1x right up to a 50x multiplier. The Mystery Mirror features are active during the free spins too.

Was the world crying out for a Megaways version of The Pig Wizard? Probably not. Blueprint Gaming has done a good job with this new edition though. It’s kept the same anarchic design and added some potentially exciting new features.

It’s pretty volatile too with the variance in the medium to high category – you can win up to 10,000 times your stake on every free spin with the 50x multiplier. We enjoyed The Pig Wizard Megaways. It won’t be for everyone but if you don’t mind the very silly theme, there’s some decent extras on offer here. If you want something more hard-hitting uses the Megaways engine, Gods of Olympus Megaways is recommended.