Recommended casinos to Play The Goonies 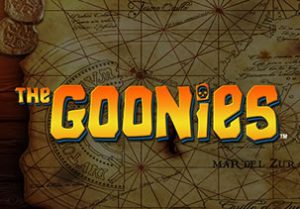 The design in The Goonies is as high spec as you’d expect. The action takes place against the backdrop of a treasure map. On the reels you’ll see A to J playing cards plus weighing scales, skeletons, pirate ships and treasure chests full of gold. The top paying standard symbol is the super stacked skull and cross bones flag which pays 50 times your stake if you land 5 on a payline. Those same payouts are on offer from the silver coin which is the wild. It replaces everything apart from the bonus.

On any spin, you could randomly trigger 1 of One-Eyed Willy’s Riches. There are 6 of these:

Following a losing spin, you could see a scythe swish across the reels and turn them into a win. A cave collapse can also turn a loser into a winner.

The Goonies also comes with 6 feature rounds. These are triggered by landing 3 Bonus symbols on the same spin. You’ll then spin the wheel to determine which bonus feature you’ll get:

If you don’t like the bonus feature you’ve been awarded from the original spin of the wheel, you can gamble and try and land a potentially more lucrative one.

The Goonies is typical of Blueprint Gaming’s high-profile branded slot games. The design is very high end and features many of the main characters from the film. There’s a huge variety of extras on offer too, both from the modifiers and the bonus rounds. You certainly shouldn’t get bored here. As far as variance goes, we’re in the medium range with top payouts of 500 times your stake on every spin.

The film version of The Goonies has gained cult status. This slot game benefits from a combination of classy sound and visuals as well as a wealth of extras to make this a very playable adaptation. If you like film-inspired slot games, From Dusk Till Dawn from Novomatic is recommended.