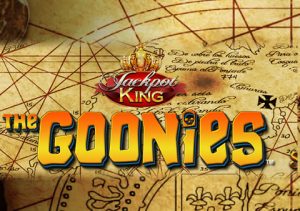 As usual for a slot game from Blueprint Gaming, the design in The Goonies Jackpot is very nicely done. A treasure map forms the backdrop to the reels which are filled with A to 10 royals as well as scales, skeletons, pirate ships and treasure chests full of gold. The skull and cross bones flag is the top standard symbols offering awards of up to 25 times stake per line. This can spin in stacked formation. There’s also a wild that offers awards the same amounts.

Blueprint Gaming don’t do things by half when it comes to features. The Goonies Jackpot is overflowing with extras, starting with the 6 base game modifiers which can strike at random on any spin:

A losing spin could randomly become a winner if a scythe sweeps across the screen or if a cave collapse takes place.

The extras don’t end with the modifiers. Land 3 bonus symbols on the same spin and you’ll activate the feature wheel. Depending on where the pointer lands, you’ll play 1 of the following extras:

The Goonies Jackpot slot is part of the Jackpot King network. The jackpot round is triggered by landing 4 Jackpot King overlay symbols on the same spin. Collect crowns to work tour way up the ladder where the big prizes are on offer. You could pocket a life-changing sum here. Each jackpot is local to each online casino or casino group – it’s not the same jackpots at every casino.

The Goonies Jackpot is just what we’ve come to expect from one of Blueprint Gaming’s branded slots. The sound and visuals are high class and there’s a huge range of extras on offer. If you like plenty of variety from your bonus features, then you’ll find that here.

Joining the mix now is the jackpot element. Whether or not the cult film comedy appears on your top movies list, The Goonies Jackpots is certainly worth a look. Other movie-inspired slot games worth checking out are Microgaming’s Jurassic World and Playtech’s Terminator Genisys.