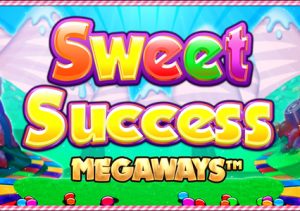 The design in the Sweet Success Megaways slot is a bright and colourful as you’d imagine. Set against a bright pink backdrop, the purple reels include A to 9 royal symbols as well as a collection of higher paying sweetie symbols. The tastiest symbol awards 50 times your total stake if you land 6 in combination. The chocolate bomb wild can land in the 4 reel windows that sit atop the main reels.

The Megaways mechanic means the number of symbols on each reel varies with each spin. This can be anything from 2 up to 7. This also varies the number of ways to win. If all 6 reels reach their maximum height, you’ll have 117,649 ways to win active.

All instances of the Mystery Symbol transform into the same symbol. A new payout calculation then follows with the new symbols in place.

These features are triggered by landing 4, 5 or 6 successive cascading reel wins in succession. You’ll then be taken to a new screen where you’ll be offered a selection of 22 sweets. Behind them lie cash prizes and free spins.

After making a pick, a Deal or No deal-style banker will make you an offer which you can accept or refuse. If you trigger the Super or Mega Pick ’N’ Mix with 5 or 6 cascades, the prizes on offer are bigger than if you triggered the round with 4 cascades.

After a pick you could receive the BonBon Bonus Spins feature. This awards both free spins and cash prizes together.

Once the picks round is completed, you’ll go on to play your free spins. These come with an expanding multiplier which expands by 1x with each successive cascade win (the Unlimited Win Multiplier feature).

A sweet version of Deal or No Deal Megaways

Sweet Success Megaways looks rather schmaltzy with all the pinks, purple and reds on display. The design was a little too sugary for our tastes. The gameplay is solid enough though with the variance in the medium to high range. It’s not the tastiest Megaways slot you’ll play but it’s a perfectly playable all-rounder if you like slots with this game mechanic.

Gameplay wise, it’s almost identical to Blueprint Gaming’s Deal or No Deal Megaways – minus the Jackpot King element. That doesn’t mean it’s a bad game though as you can still win 10,000 x stake on every spin. If you like the mechanic, I would try my luck with NextGen Gaming’s Medusa Megaways which offers the highest Megaways RTP at 97.7%.