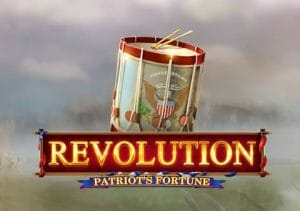 Go back to the 18th century

The battle between American rebels and English redcoats form the backdrop to the action here. The reels include the usual lower value royals as well as a pistol, a drum, horse, wagon and a cannon. The soldier is the best standard symbol. Land 5 of these on a payline and you’ll pocket an award of 50 times your total stake.

The general (who looks like a slightly deranged Mel Gibson) is the game’s wild. As usual, he substitutes for all the standard symbols. Whenever the general appears, he expands to turn the whole of that reel wild.

The bugle is the scatter symbol. Land 3, 4 or 5 of them on the same spin and you’ll pocket an award of 2, 20 or 50 times your stake as well as triggering the Free Spins feature. On offer here are 15 free spins.

Those free spins take place on Burning Reels. When the expanding wild General appears, he’ll expand to give you a wild reel (like in the base game) and start a blaze. The royal symbols are removed and new higher value symbols drop in to replace them. A new payout calculation is then made with the new symbols in position. You can also retrigger the feature to win 15 additional free spins.

The design in Revolution: Patriot’s Fortune is what we’ve come to expect from a release from Blueprint Gaming. It’s backed by a sweeping score that gives the game an epic quality. The base game action is simple but the game can really spark into life in the Free Spins feature courtesy of the Burning Reels.

We found it pretty fiery on the variance front too. With an average RTP of 95.4%, the most you can win is 1,000 x stake on each spin or free spin (by filling the reels with the General and/or wild reels). The theme here is quite unusual but it all comes together pretty well.

Other worthwhile Blueprint Gaming titles include The Goonies (which has an abundance of bonus features) and Deal or No Deal Megaways which is highly volatile and has lots of good bonus extras.