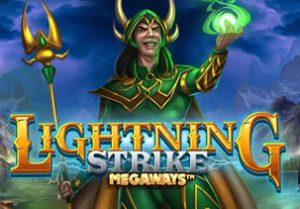 The action takes place on the shape shifting MegaWays game engine where the number of symbols on each reel changes with each spin. At their maximum, they can offer 15,625 different ways to create a winning combination. Joining the A to 9 royal values are a quartet of Norse gods. The best payer will get you 0.5, 1, 5, 10 or 50 times your stake if you land 2, 3, 4, 5 or on adjacent reels.

Look out for Yggdrasil – The Tree of Life. All instances of this symbol that land on the same spin transform into the same matching symbol. A new payout calculation follows with the new symbols in position. This is known as the Mystery Might feature.

Central to the action here is the Mjölnir wild (Thor’s hammer) - these can land on reels 2, 3, 4 and 5. When these hit, they expand to fill the whole of the reel. They can also add a multiplier boost of up to 5x. The Lightning Strike Wilds also trigger the Lightning Strike Respin feature where you get a re-spin with the stacked wild locking in place. If another wild hits, the process is repeated. In theory you could fill all 4 central reels with wilds and multipliers.

Land a winner of 5 times your stake or more and you’ll entry to the Mega Spins Exchange feature – depending on where the pointer lands, you could land up to 25 mega spins or an even bigger cash win. Lose the gamble though and you’ll lose your original win. If you do end up with the free spins, they’re played out on an enhanced set of reels which can really boost your winning chances. The expanding wilds, multipliers and respins are in play during the free spins round too.

Lightning Strike MegaWays is another all-action addition to the MegaWays catalogue. The design isn’t quite as sharp as some similarly themed slot game but does the job well enough. The gameplay delivers plenty of action though thanks to the expanding wilds and multipliers. Add the potential from the Mega Spins into the mix and this Norse saga becomes a very playable one.

Variance wise it’s in the middle but you can win 10,000 times your stake on every spin – if you like the Norse theme, Vikings Unleashed MegaWays from Blueprint Gaming is a better game. I also suggest you try Holy Diver MegaWays from Big Time Gaming which is much more volatile and has payouts to match – up to 23,306 times your stake on every free spin.