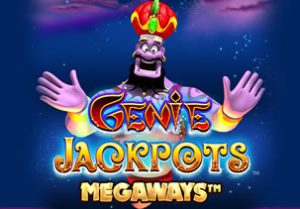 Genie Jackpots MegaWays is a bright and colourful slot. The reels feature lower value royal symbols plus scimitars, turbans and chests full of treasure. The Genie Jackpots logo is the most lucrative symbol. Land 2, 3, 4, 5 or 6 of them on adjacent reels and you’ll receive a payout equal to 0.5, 1, 5, 10 or 25 times your total stake. There’s also a standard wild that can land anywhere apart from reel 1.

In the base game you could see an animated genie come to life and award a Genie Power Spin. This is a spin with 1 of the following 4 modifiers active:

Land 3, 4, 5 or 6 Bonus symbols on the same spin and you’ll trigger the Genie Free Spins feature and with it 10, 12, 15 or 20 free spins. Before they begin, pick from 1 of the 4 magic lamps which will award a special modifier extra which will be in play throughout the free spins:

Finally, there’s a Bonus Wish Bet feature which is triggered when you pay 100 times your stake – you get access to the Genie Free Spins feature where you can pick your modifier (the Unlimited Multiplier feature all day long!).

There are plenty of moving parts in Genie Jackpots MegaWays. That’s largely down to the MegaWays game engine which can deliver plenty of action. The base game Genie Power Spins also help things tick over. The best chances come via the Genie Free Spins feature though with the unlimited multiplier.

It’s certainly not the most sophisticated slot game you’ll come across. There’s a brashness to the visuals and the bouncy backing track blends old and new. The features are pretty good and the MegaWays set up keeps the pace high.

If you’ve enjoyed the other slot games in the MegaWays series, like Diamond Mine and Irish Riches, then Genie Jackpots MegaWays offers more of the same.