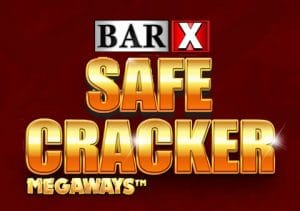 Bar-X Safecracker MegaWays has the look of an old-fashioned fruit machine. You’ll hear the clunk of a one-armed bandit pull with each spin. On the reels you’ll find A to 9 symbols as well as an X, a bar and a lucky red 7. The best standard symbol is the diamond which pays 1, 2, 10, 25 or 50 times your stake if you land 2, 3, 4, 5 or 6 on adjoining reels. There’s also a wild that replaces all the standard symbols.

After a successful spin, the winning symbols are removed and new ones drop in and replace them with the Cascading Reels feature. These continue until no new winner lands. The number of MegaWays chances with each spin. If each reel is at its maximum height, there are 117,649 ways to create a winner.

Choose from 1 of the 8 safes. This will reveal the number of free spins you’ve been awarded. The cascading reels are in play during the free spins round. Each winning cascade increases a multiplier by 1x with the Unlimited Win Multiplier feature. This multiplier doesn’t revert to 1x following a winless cascade either. Get on a roll here and the coins can quickly build. Hope to see 3 or 4 scatters on the horizontally spinning reels at the top of the screen as this adds another 5 or 10 free spins to your total.

This is pretty straightforward for a MegaWays slot game. The design is simple but very nicely done. The basic gameplay matches the old school theme. It all works rather well though. Medium to high variance, you can pocket 10,000 times your stake on every spin or free spin.

If you like vintage slot games with a modern twist or 2 thrown in, then you’ll find just that in Bar-X Safecracker MegaWays. For something with more bonus features and the popular game engine, you cannot go wrong with Kingmaker (from Big Time Gaming).