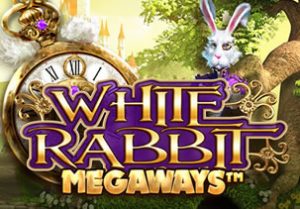 Based on Lewis Carroll’s classic tale

The reels feature a range of characters associated with Lewis Carroll’s fantastical story. They include the Mad Hatter, the Dodo, Tweedledum and Tweedledee and the Cheshire Cat. They’re joined by red, green and blue gemstone and the Red Queen which is the top paying symbol. There’s also a wild that can land on reels 2 through 5 only. There’s a decent range of extras on offer in White Rabbit.

To the side of the reels you’ll see a snoozing caterpillar. On any spin, it can wake from its slumber, have a blast of the hookah pipe and fire a selection of multiplier wilds onto the reels. These can boost payouts by 2x or 3x or combine for even bigger awards. This is known as the Caterpillar Wilds feature.

White Rabbit comes with a Free Spins feature – this is triggered by landing 3 scatters on the same spin. You’ll then receive 15 free spins. These are played on extending reels which can increase the number of ways to win. Each time a cupcake symbol lands, it’s replaced by 2 standard symbols and the length of the reels increases.

If a reel reaches its maximum length of 12 symbols, you’ll get a re-trigger and another 15 free spins. Extra top paying Red Queen and wild symbols are added if you fully extend a reel. All in all, you can play with 248,832 Megaways!

There’s up to 75 free spins to be played with in total. If you don’t want to wait to trigger the feature, you’ll have the option to buy it. The price is shown in the meter in the top right corner of the reels. Each time a gold coin symbol lands the price to buy is reduced.

As usual for a Megaways slot game, there’s plenty going on in White Rabbit. Despite all those moving parts, the design here is pretty good. It’s the game engine that’s the main attraction in fact, especially during the Free Spins feature where the expanding reels can deliver plenty of opportunities.

The base game action isn’t bad either and the Caterpillar Wilds keep things ticking over. The variance here is in the medium to high range with top payouts of 13,000 times your stake on every spin.

The fairy tale theme isn’t usually one of our favourites. We quite enjoyed White Rabbit though thanks largely to the Megaways set up. If you’ve enjoyed the other slot games in Big Time Gaming’s series, then expect more of the same here. I would also try Extra Chilli which is my favourite.