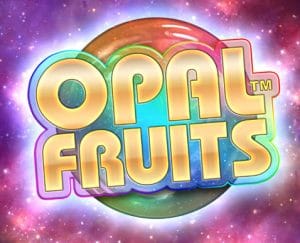 At first glance, Opal Fruits looks like a straight up MegaWays slot game. Closer inspection reveals a few key differences though. The reels are set up in a 3x5x5x5x5x3 configuration. The 5 high columns see symbols come in horizontally rather than vertically. Together they combine to offer 5,625 potential ways to win.

Set against a futuristic space scene, the reels are filled with A to 9 royals plus a selection of classic fruity imagery. The best payer is the grapes symbol which awards 50 times your stake if you land 6 on adjacent reels. After a winning combination hits, the Reaction feature kicks in - the successful symbols are removed and new ones drop in and replace them. These continue as long as a new winning combination is created.

Wilds are central to the best action here. The standard will can appear in the 4-symbol window at the top of the reels. There’s also a 3x wild that trebles a payout when it forms part of a winner. Land more than 1 multiplier wild on the same reel and they’re added together. Multiplier wilds on different reels are multiplied. In theory, you could end up with a multiplier boost of 1,296x! Multiplier wilds are in play in the base game only.

Also spinning around the reels are gold letters. If these combine to spell the word FREE, you’ll trigger the game’s Free Spins feature. On offer here are 10 free spins. Hope to see extra golden letters on the triggering spin. 1 extra letter means you’ll start the feature with a 5x multiplier – 2 extra letters and there’s a 10x starting multiplier.

Each reaction win that lands during the feature boosts that multiplier by 1x. There’s no limit to how high this multiplier can go. If you reach a multiplier that ends in a 0 (e.g. 10x, 20x, 30x etc), then 5 free spins are added to your tally. Again, there are no limits to how many free spins you can play with.

Opal Fruits is another highly innovative and very playable slot game from Big Time Gaming. It might not have the glossy looks of titles from some developers but the gameplay here is second to none. It’s volatile too with top wins of 36,000 times your stake on each spin/free spin.

It would have been easy for Big Time Gaming to sit back and rely on its MegaWays mechanic. They’re delivered something equally fresh in Opal Fruits which is well worth investigating if you’re after a game that delivers potentially explosive action. If you’re wondering what MegaWays is all about though, Bonanza (the original MegaWays game) is the perfect place to start.