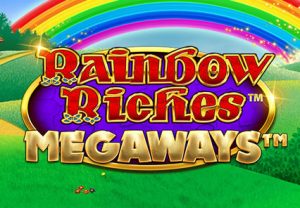 There’s nothing overly sophisticated about the design here. With a traditional jig playing in the background, the action takes place against a backdrop of rolling fields and of course a rainbow with a pot of gold lying at the end of it. On the reels are A to 9 royals as well as higher paying gemstones. The top jewel is the white diamond. Land 2, 3, 4, 5 or 6 of these on adjoining reels on the same spin for a payout of 2, 5, 10, 25 or 50 times your total stake. Helping to create the winners is the horseshoe which is the wild.

The number of symbols on each reel changes with each spin. So too does the number of potential ways to win. The minimum number is 324. If the reels expand to their maximum configuration, you’ll have 117,649 MegaWays live. The Cascading Win feature is used here. After a winner lands, those winning symbols are removed and new ones replace theme. The cascades keep on coming until there’s one where no new winner hits.

There are a few extras to take not of here beginning with the Super Gem Bonus feature. This is activated when the rainbow gem lands on 1 of the 4 window positions at the top of the reels. All the higher value gemstones anywhere on the reels morph into the same symbol. A new payout calculation is made with the matching symbols in place.

Then you have the Free Spins Bonus feature - land 4 pot of gold bonus symbols on the same spin and you’ll receive 12 free spins. Each extra bonus symbol adds another 5 free spins to that total meaning you could begin with 22. Cascading reels are in play just like in the base game.

The wrinkle is that each cascade also increases a multiplier by 1x (known as the Unlimited Win Multiplier feature). Unlike in some other slot games, this doesn’t reset to 1x after a winless cascade. There’s no limit to how the multiplier can reach either. Hope to see +1, +2 or +3 symbols in the top window position to add more free spins. There’s an infinite amount of free spins to be won too.

If you don’t want to wait to play the free spins, then you’ll have the opportunity to buy the round with the Buy feature. At 100 times your total stake, it’s not a cheap option. To help you though, Rainbow Riches MegaWays comes with some little extras:

This reworking of Rainbow Riches is as simple as you’d expect but nicely done. The MegaWays mechanic provides plenty of action and the expanding multiplier in the Free Spins Bonus feature is where the real value is – the Super Gem Bonus feature can also provide huge wins if you have a high number of MegaWays and lots of gem symbols on the reels.

Medium to high variance, you can win up to £250,000 per spin/free spin! If you’ve enjoyed the simple fare offered by the original Rainbow Riches slot game then this MegaWays version is certainly one to consider. I would take a look at Big Time Gaming’s Bonanza though which is the game that started it all off.