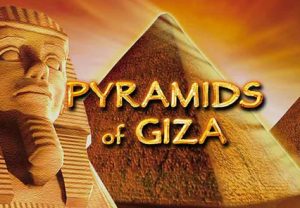 The set up in Pyramids of Giza is a very simple. The reels are made up of lower value A to 10 royal values. They’re joined by a series of high value symbols where you’ll need just 2 symbols in a line to create a winning combination. In order of value are the flower which pays 0.5, 2, 7.5 or 25 times your total stake followed by the scarab beetle and eye of Horus which award 0.5, 2.5, 10 or 50 and 0.5, 5, 20 or 100 times your stake respectively.

The best paying symbol is the Sphinx which is the game’s wild. This substitutes for all other symbols apart from the pyramid which is the scatter. Land 2, 3, 4 or 5 of these on the same payline and you’ll receive a payout of 1, 10, 100 or 500 times your stake.

Land the scatter symbol on reels 1, 3 and 5 on the same spin and you’ll trigger the Pyramids of Giza Free Spins feature. On offer here are 10 free spins. You can re-trigger more free spins here too.

Now, if you play at bigger stakes, your chances of wining increases as the RTP % (the Return to Player %) increases up to 96%. Saying that, the maximum you can win is 2,500 times your total stake from any spin.

This is a really stripped back take on the classic ancient Egyptian-themed slot game. The visuals are pretty rudimentary and there’s not even a hint of Arabia in the base game soundtrack. It’s a similar story with the gameplay which is very straightforward. The only extra is the free spins round.

Some of Barcrest’s branded slot games are so filled with extras it can seem a little daunting to play them. Others, like Pyramids of Giza, are almost too simple. There’s a happy medium to be found somewhere. This slot game will no doubt please Egyptologists.

The volatile gameplay is simple but entertaining enough. If you like games with plenty of extras though then you’ll be better served looking elsewhere though – such as Ark of Mystery from Quickspin which is excellent.