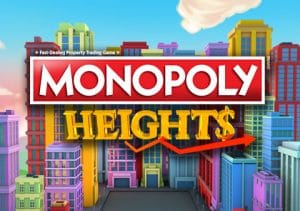 Based on the Monopoly board game

The design here is unmistakably from the Monopoly franchise. With blocks of skyscrapers in the background, the reels are made up of A to J symbols (in the game’s famous font) as well as the free parking car, a ring and piles of cash. The most rewarding symbols are the diamond, Monopoly Heights logo and Mr Monopoly. These pay equal to your total stake if you land 5 of them on adjacent reels. There’s also a wild that can land on reels 2, 3, 4 and 5 only.

Every time a winning combination hits that includes Mr Monopoly, the Expanding Reels feature is triggered. An animated Mr Monopoly will appear on the screen and give the reels a whack with his cane. This increases the number of rows in play as well as the number of potential ways to win.

The reels are locked and a new set symbols are added to the new row. If this creates another winner that includes Mr Monopoly, the process is repeated. A succession of winning spins can see the reels increases to 8 rows high which combine to offer 32,768 ways to win.

The other symbol you’ll see is the red hotel scatter which can land on reels 1 and 5 only. When it hits on both of those reels on the same spin, you’ll trigger the Jackpot feature. You’ll then be offered a selection of 32 Bonus cards. Pick to reveal Mini, Minor, Major or Grand symbols which are collected in a meter. The meter that fills first is the jackpot that’s awarded. Here are the potential jackpot prizes:

Monopoly Heights is very straightforward compared to some of the more feature-filled slot games in this series. The expanding reels are the key here and can deliver some decent action - fill the reels with the high value symbols on an expanded reel set to win 32,768 times your stake! The jackpot round can deliver too.

Monopoly Heights isn’t the most exciting slot game you’ll see. If you’re looking for a title that offers plenty of variety then you won’t find that here. If you fancy some simple gameplay with a familiar theme, that’s just what you can expect here. Saying that, there are much better Monopoly themed slot games available with Monopoly Once Around Deluxe from sister company WMS my favourite.