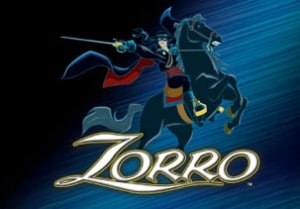 Aristocrat slots are never likely to win any Best Design of the Year awards and that's the case with Zorro - look out for cartoon-style visuals featuring barrels, horses, the lovely Juliana, the not so lovely Monastario and of course our masked hero.

Play with the Zorro Bonus active (which will cost you an extra 10 coins per spin) and you'll trigger 1 of 5 features if the letters spell Zorro across the reels on any spin.

The features are triggered at random. First up is the Tornado Bonus which will award an instant cash bonus of up to 500 times your line bet.

Next is the Golden Coin Bonus - it's a variation on the pick me round. Keep picking from the coins shown until you find two the same. You can win up to 500 coins here which can be boosted by between 2x, 3x, 4x, 5x or 10x if you're lucky enough to find a multiplier during the round.

The Wild Z Bonus will give you 3 free spins with a wild Z symbol randomly placed on the reels. Those symbols will remain wild for the duration of the round.

If it's the Magic Door Bonus you have to pick a door to reveal a character, either Zorro, Juliana or Monastario. You'll then be awarded 5 free spins. If your chosen character appears during the bonus spins, you'll be awarded a cash bonus of between 500x and 1,000x.

Finally, there's the barrel bonus where you can choose a combination of free spins and multipliers. The options are:

The 15x multiplier is certainly a tempter but we usually opt for one of the two middle options during the free spins.

As far as features go, Zorro is pretty stacked for an Aristocrat powered slot. There's a decent variety too, it's a slight shame that you don't get to choose which one you want. There's certainly plenty of action on offer though. This isn't as volatile as some of Aristocrat's fruitier offerings like Pelican Pete. The variance is somewhere in the medium range so expect a more balanced range of payouts.

Yes, the imagery looks a little tired yet the range of bonus rounds make up for that lack of visual flair though. Get lucky with the bonus rounds and Zorro can still provide plenty of thrills. If you like slots based on heroes, Playtech offer the Marvel games with The Avengers being the best one.