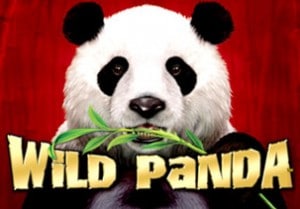 Set against a lucky red bamboo backdrop, the reels in Wild Panda give a small taste of Asia. Look out for lotus flower, ruan (Chinese guitar) and koi carp on the reels. The pagoda is the top payer of the standard symbols offering 1,000 times your line bet if you hit 5 in a payline. They're joined by a gold coin which is the scatter and playing card symbols from A to 9.

People don't play Aristocrat slots for their stunning sound and visuals and that's the case here - the imagery is nice and clear and perfectly serviceable but it's not the most arresting slot you'll ever come across.

Where Aristocrat slots usually come into their own is in the action packed bonus rounds - there is only one of them on offer in Wild Panda. It's a Free Spins feature and is triggered slightly unusually. Instead of relying on scatters, you'll see letters that spell the word panda appearing on the reels. P is on reel 1, A on reels 2 and 5, N on reel 3 and D on reel 4. When they all hit anywhere on their respective reels and align to spell the word panda you'll trigger the feature.

Once active, you'll be awarded a slightly miserly sounding 5 free spins. There is an extra to make up for the lack of numbers though, namely, all the symbols that spelled panda will be turned into wilds.

You may wonder what the scatter offers in the base game if it doesn't trigger the free spins. It still offers payouts if they hit anywhere on the reels with five of them giving you a payout of 500 times your total stake.

Wild Panda may have the familiar looks and typical theme for an Aristocrat slot but the volatility isn't quite as high as some titles created by the Aussie developer. The variance here is in the medium range but with it being a 100 payline affair there's usually plenty of action.

It may not be as impressive as the developer's Miss Kitty but if you're a fan of Aristocrat powered titles or even just the Asian theme, you'll find enough reason to give Wild Panda a spin.  If you like animal themed slots though, Raging Rhino by WMS is very good.