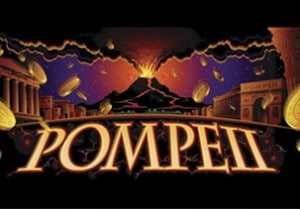 Visually, Pompeii is starting to look its age - symbols on the reels include an assortment of blocky shields, swords, coins, chariots and helmets alongside standard playing card symbols. They look a little tired compared to the sharp, HD imagery we've come to expect from recent releases.

The sound is Aristocrat's standard range of bangs, bleeps and cheers which are joined by a cry of 'veni, vidi, vici' (I came, I saw, I conquered) whenever one of the bonus inducing coins land. Don't let the sound and visuals put you off though as under the bonnet of the clunky exterior is a rather exciting game that really flies during the free spins round.

To trigger the feature, you'll need to find 3 or more golden coins anywhere on the reels. Three coins will get you 10 free games, four will offer you 15 with 20 free spins awarded if you find five gold coins.

The 243 ways to win game engine (or as Aristocrat calls it, Reel Power) keeps the pace high. The real action comes in the free spins round though. The variance is on the high side of medium so the free spins don't come along that often - if you manage to get lucky with the wilds then the results can be explosive with an eruption of coins certainly a possibility if you find that 15x multiplier.

And oldie it may be but the big feature rounds means that Pompeii is still very much a goodie. If you like volatile offerings, Choy Sun Doa is worth trying as to is Geisha (both by Aristocrat).