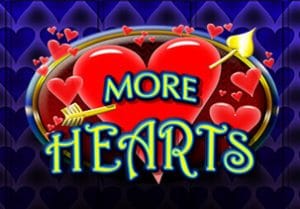 It's fair to say that the designers of More Hearts won't be hanging up any awards on their mantle piece - the visuals are extremely basic. Set against a plain blue backdrop, symbols include lower value A to 9 playing cards alongside a block of dollar bills, butterfly, pair of birds, yellow flower and a leopard.

It's almost as if they called out objects at random and decided to include them - they're not especially well drawn either. Ugly they may be but they can deliver some decent amounts of coins. 5 leopards on a payline will get you a none too shabby payout of 1,500 coins.

Landing 3 or more of the More Hearts logo on the same spin triggers the Free Spins feature and with it 12 or 15 free spins depending on whether you opted to pay the ante. The screen then splits into 4 with 2 games running simultaneously.

Every time a heart lands during the feature, it is collected. Once you've accumulated 9 hearts, a third reel set is opened up. Land 14 to open up a fourth. It's here where the game gets potentially much more interesting. 4 reels sets with possible re-triggers offers some fantastic winning chances.

The Free Spins feature isn’t the easiest to come by though. Expect lengthy spells where you'll hear the thud, thud of the 2 bonus symbol hitting but just miss out of landing a third. The free spins can pay dividends when they do hit though.

It's by no means a thing of beauty but the bonus feature makes More Hearts a playable slot. If you're looking for a volatile, live casino conversion then More Hearts is certainly worth considering. It’s very similar to More Chilli (also by Aristocrat) but I do prefer some of their other titles such as the iconic Where’s The Gold.