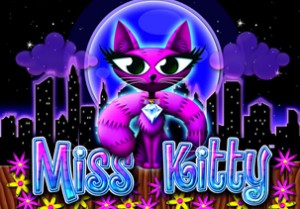 Miss Kitty started life as a land based casino slot and that's evident in both the visuals and the gameplay. Symbols on the reels include objects typically associated with cats so look out for goldfish, mice, birds, balls of wool and milk. They're drawn cartoon style and are pretty basic. Joining them are Aristocrat's standard playing card offerings. The cat is the wild - it only appears on reels 2, 3, 4 and 5 and substitutes for all other symbols apart from the scatter.

The moon is the scatter, appearing on reels 1, 2 and 3. Find 3 of them on a single spin and you'll trigger Miss Kitty's main bonus offering, the Free Spins feature. Once activated, you'll be awarded 10 free spins.

Whenever the cat wild hits during the feature, it will remain frozen in place for the remainder of the feature. Look out too for when the scatter appears directly underneath a wild symbol during the feature as you could be in line for a special bonus. Find 3 scatters and you'll be awarded another 5 free games - you can do this only once.

Miss Kitty is a pretty basic game, both in terms of imagery and gameplay - there's nothing earth shattering on show. The symbols are simply done and the soundtrack is the generic Aristocrat offering.

Where Miss Kitty excels is in the free spins feature where the sticky wilds can provide a real boost to your potential wins. There is no limit to the number of wilds that can hit. Get a few on your first couple of free spins and the wins can soon start to build. Fill up those reels with wilds and you could be celebrating like the cat that got the cream.

If you like sticky wilds, Aristocrat also offer Pelican Pete – alternatively, you have the volatile Dead or Alive by Net Entertainment which is brilliant.