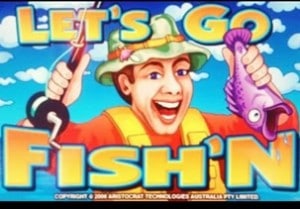 Set against a deep blue backdrop, the reels in Let's Go Fish'n are packed with images you'd expect to see on a day at sea. Look out for a rod and bucket, worm on a hook, seagull and our hero the fisherman. They're joined by Aristocrat's standard playing card symbols, this time from A to J. The fisherman is the biggest payer of the regular symbols, giving you 500 times your line bet if you're lucky enough to find 5 in a payline.

There's no wild in the base game but look out for the Let's Go Fish'n sign which is the scatter - 3 or more of these will net you a prize of between 2x and 50x your total bet. They'll also trigger the bonus feature where you'll be awarded between 3 and 10 free games.

Before the feature starts, choose 1 of the regular symbols. Whenever that symbols appears on the reels during the bonus feature, it will be turned into a wild and substitute for everything apart from the scatter. It's possible to turn up to 3 symbols into wilds for the duration of the feature which can give a very healthy boost to your winning chances. More free spins can be re-triggered during the round so hope to see those Let's Go Fish'n signs again and again.

Let's Go Fish'n is pretty standard fare and has the look and feel of a brick and mortar casino slot. The cartoon visuals are nicely done but the standard Aristocrat sound effects add little to the mood. It does remind me a little of IGT’s Lucky Larry’s Lobster Mania 2 (and the original of course).

On the features, front, it's all about the free spins - the variance is in the medium range. Sometimes it will feel like the one that got away. Manage to get all three possible wild symbols and a re-trigger of the free games and a big catch is certainly possible. If you like fish-themed slots, Lucky Angler by Net Entertainment is worth playing.