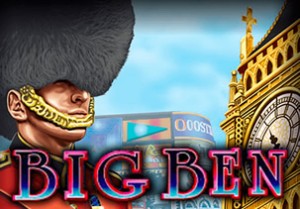 If you were to quiz tourists from around the world to name an object associated with London the chances are they'd come up with some of the symbols on the reels here. Look out for a pub sign, red telephone box, double decker bus, Union Jack and royal crown. The red-coated guardsman, complete with busby, is the wild, substituting for all other symbols apart from the scatter.

Any winning payline which includes a wild will benefit from a 2x multiplier with the payout doubled. The wild can deliver some hugely impressive results in its own right. Just two guards will get you 10 coins. If you're lucky enough to find fine in a payline a massive 30,000 coin payouts awaits.

Big Ben is the scatter (pedant alert, Big Ben is actually the bell rather than the clock!). Between 2 and five scatters will get you a payout of between 2 and 1,000 times your total bet. Find 3, 4 or 5 scatters and you'll also trigger 15, 20 or 25 free spins. All wins during the free spins will be doubled. You can trigger even more free games if the scatters hit during the bonus giving you up to 50 free spins in total.

Find the scatter on reels 1 and 5 in the base game and you'll trigger the Big Ben feature - it's based on the clock's famous chimes. The greater number of chimes you hear, the bigger the prize you'll be awarded. It starts at a 2x bonus for a single chime but can top 500x if you get all 12 chimes.

The variance in Big Ben is pretty low so your money should go a long way (unlike a real trip to the capital). It may be as authentic as Dick Van Dyke's cockney accent in Mary Poppins but Big Ben is still an entertaining little slot that can deliver some decent rewards. However, it’s not my favourite Aristocrat title by a long way with favourites such as Choy Sun Doa and Queen of the Nile II much more appealing.