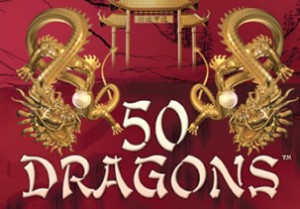 The imagery on show in 50 Dragons has a decidedly Oriental feel. Set against a rich, dark red backdrop, the reels include a selection of golden animal icons including fish, chicken and lions. The latter two are the biggest payers of the animal symbols, giving you 500 coins if you find five on a payline. There is also an ornate golden dragon which will pay 1,000 coins for a 5 symbol combo.

Appearing on reels 2, 3, 4 and 5 only, the white pearl is the game's wild, substituting for all other symbols apart from the scatter. That scatter symbol is the golden ingot. This only appears on reels 1, 2 and 3. Find three golden ingots on a single spin and you'll be awarded a payout of four times your total stake. More importantly, you'll trigger 50 Dragons' only bonus feature, the Free Games feature.

Once triggered, you'll be awarded an initial 10 free games. The bonus here is that an extra wild pearl is added to reels 2, 3, 4 and 5. These can appear as stacked wilds and can provide a very timely boost to your winning chances. Find 3 ingots during the feature and you'll trigger 5 more free games. It is only possible to do this once.

The Asian themed slot has proved a hugely popular genre for game developers - other titles, such as Play ‘N Go’s Pearls of India, certainly have better visuals than those on display in 50 Dragons. It does have a slight old school charm about it though. The reels have the feel of a veteran fruity, albeit one with a distinctly Asiatic feel, and the soundtrack sounds like it was put together on a 1980s Casio keyboard.

The variance in 50 Dragons is in the medium range - it's certainly possible to win big in the bonus round but wins around the 20 to 30 times your stake mark are more usual. Simple it may be, but 50 Dragons is worth a look if you're a fan of Asian-themed slots. I would also recommend you take a look at Where’s The Gold which is Aristocrat’s most popular game.