Recommended casinos to Play 2 Can 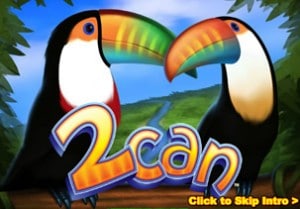 A jungle setting forms the backdrop to 2 Can. The nature theme continues on the reels with frogs, monkeys, lizards, butterflies and leopards all featuring. They're joined by lower value playing card symbols from A down to 9. The Toucan is the game's wild, substituting for all other symbols apart from the scatter. The imagery is nice and sharp against the pale blue reels. The soundtrack is disappointing though. We expected something more in keeping with the jungle genre. As it is, it adds little to the theme.

There are two special symbols to keep an extra eye on. The purple flower is the scatter - 3 or more of these will net you a prize of between 5, 25 or 150 times your total stake depending on whether three, four or five of them hit. The scatter is also the key to unlocking 2 Can's only feature, the free spins bonus round.

Three scatters will get you 10 free spins, four offer 15 with 20 to be had if you manage to find five scatters. Whenever a toucan wild lands during the bonus round, it will fly off to the left of the screen. Two toucan wilds will then fly in from the right of the reels.

One will return to the original position vacated with the second wild landing on a randomly selected symbol. The two toucans can never lend on the same symbol. More free spins can be re-triggered if the scatters land during the feature.

2 Can is pretty simple fare - the visuals are solid rather than spectacular. That's the case with the gameplay too. The free spins round offers the best route to a big win thanks to the extra wilds that can fly onto the screen courtesy of the toucan. Get lucky here and this little bird can help you soar away with decent amounts of coinage. It’s not Aristocrat’s best game but isn’t bad – however, I’d much rather play Choy Sun Doa or Where’s The Gold.