Recommended casinos to Play King of the Jungle 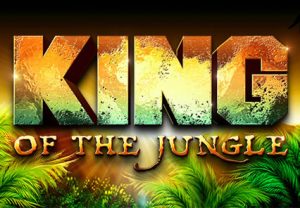 We’ve been a bit sniffy about the tired design on display in many Ainsworth slot games. It’s still not up to the standard of many developers but the imagery in King of the Jungle is slightly better than usual. Set against a jungle backdrop, you’ll see A to 9 royals as well as a snake, a tribal spear and shield, a statue and the face of the gorilla. The best of the standard symbols is the drum which pays 0.2, 2.4 or 8 times your total stake if you land 3, 4 or 5 on a payline. There’s also a wild that replaces all the standard symbols. This can hit on the middle 3 reels only.

King of the Jungle comes with a Free Games feature - it’s triggered by landing 3 of the gorilla scatter on the same spin. If you land 2 scatters on the same spin, you’ll trigger the Second Chance Respin feature which gives you another go at triggering the feature.

After a payout of 2, 20 or 50 times your stake, you’ll go on to play 10 free spins. During this round, the standard wild can land on reel 3 only. Joining the action are a pair of multiplier wilds. The 3x multiplier wild can appear on reels 2 and 4 with the 5x multiplier wild appearing on reel 4 only. Land 2 scatters and 5 extra free spins are added to your total.

Also joining the action in the Free Games feature is the golden gorilla eyes symbol. Fill whole reels with this symbol and you’ll have a chance to win the Mini, Minor, Major or Grand Bonus prizes. These are worth £200, £800, £2,000 and £30,000 respectively.

King of the Jungle is a pretty standard slot game from Ainsworth. It won’t be winning any awards on the design front and the gameplay is simple. As usual, an amended paytable is used in the Free Games feature. You won’t find anything spectacularly innovative here.

If you like Ainsworth’s straightforward offerings, then you’ll find plenty that’s familiar in King of the Jungle. It’s not one we’ll be rushing back to play though. If you want the same theme with bigger win potential, Gorilla Go Wilder by NextGen Gaming would be my choice (you can 37,500 times your stake on each free spin in 1 of the features.