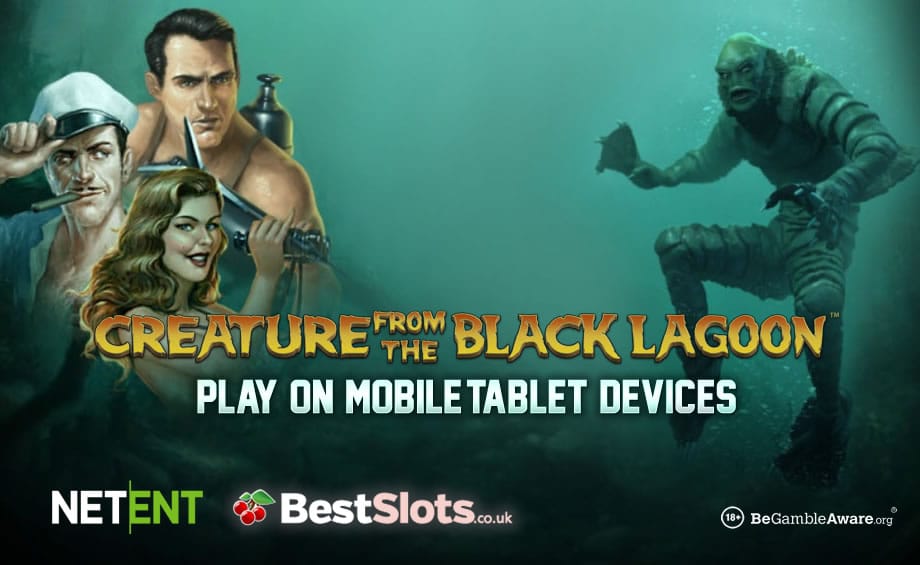 NetEnt has released a HTML5 version of the Creature from the Black Lagoon slot game which allows you to play on mobile and tablet devices (as well as desktop).

Why play Creature from the Black Lagoon?

The Creature from the Black Lagoon slot was originally released in 2013 but was only available to play on desktop devices (laptops or PCs). It has now been revamped in HTML5 format which means you can now play the game on mobile and tablet devices too (i.e. iOS, Android and Windows operated devices).

With 5 reels and 20 paylines, it’s the official slot for the 1954 film and has been produced in association with Universal Pictures. Playable from just 20p a spin, the story is about a half-human, half aquatic creature called Gill-Man. With superb graphics and animations, you head to the Amazon.

There’s a Re-Spin feature which is played when you get a wild symbol on the reels – acting as a sticky wild, new wilds also become sticky with more re-spins awarded. The re-spins continue until no more new wilds land.

There is also a Free Spins feature where you can begin with up to 20 free spins. It’s all about the Target symbol on reel 5 as this fills the health meter. They take you to different levels which reward you with sticky wilds on re-spins, spreading wilds and extra free spins (with spreading wilds).

With a high RTP of 96.47%, you can win up to 750 x stake on every spin or free spin. For full details, go to the Creature from the Black Lagoon slot review where you can also try for free.

Get 25 Creature from the Black Lagoon extra spins

You can get 25 extra spins to use on the Creature from the Black Lagoon or any other NetEnt slot game at Gate777 Casino. Firstly though, there’s a 100% first deposit bonus up to £100 – once you deposit, you can use your extra spins as you wish.

With over 1,000 slots, 24/7 customer support, 24 hour cashouts and a unique travel theme, this reputable UK casino has a brilliant VIP Lounge which rewards its players with higher bonus offers/promotions, birthday and holiday gifts, cashback deals with no wagering requirements, exclusive tournaments and cash drops.